Why Paris is such an utter plonker 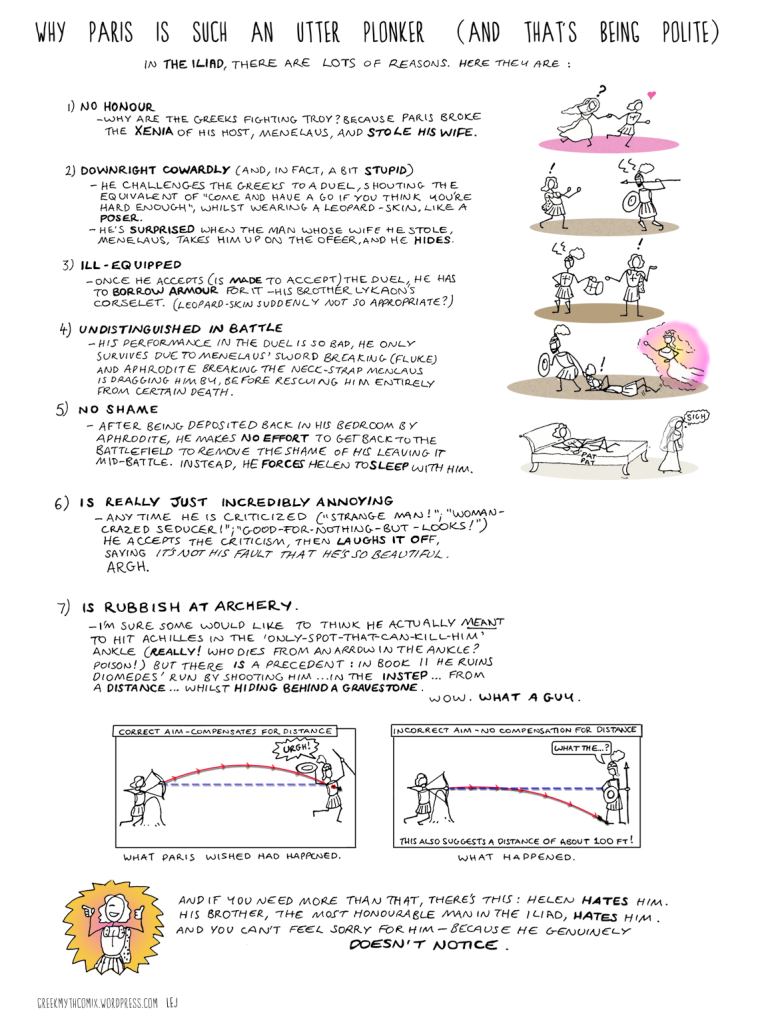 You should use the comix Kudos and Aidos and What makes a Homeric hero to help you understand further, but here are a batch of supporting quotations to make it absolutely clear. If you prefer not to read them you should instead watch this video.

1) Hektor tells Paris “Our people are dying … and it is because of you that the clamour of war is blazing round this city.” Book 6

2) “…godlike Paris kept moving out in front of the Trojan ranks, wearing a leopard-skin over his shoulders, and a curved bow and sword. Shaking a couple of bronze-capped spears, he constantly challenged all the best men of the Argives to fight him one to one in grim combat… But, when godlike Pairs saw Menelaus appear among the front fighters, his heart quailed and he shrank back into the mass of his companions to avoid destruction.” Book 3

3) “Next, he put a corselet around his chest: it was his brother Lykaon’s, and it fitted him.” Book 3

4) This is divine intervention. A god actually comes down and changes the outcome of an event. This rarely happens (and the reason the film ‘Troy’ all goes wrong mid-way is because they chose not to include it) and it’s a really massive deal. The fact that it’s done for Paris, so that he can go and sleep with his ‘wife’, really highlights how exceptionally rubbish he really is. Also, he only ever makes hits when using a bow-and-arrow, which is not a hand-to-hand combat weapon. It’s a sneaky git’s weapon. There’s no honour in this kind of fighting at this time: the duel and its completion is the most important thing.

5) Helen, after being forced to go to Paris’ bedchamber by Aphrodite who threatens to end her, tells him in no uncertain terms that she wishes he was dead. He replies like a total creep: “Wife, do not deride my courage with these hard taunts. This time Menelaus has beaten me with Athene’s aid, and another time I shall beat him: there are gods on my side too. [EDIT: What? WHAT? You were rescued by Aphrodite from a duel, a duel that in fact was solemnised by a sacrifice in order that the winner would take Helen home. You are not the winner. *resists urge to punch him in the face*]  No, come, let us enjoy the bed of love. Never before has desire so enveloped my heart, not even that first time when I stole you away from lovely Lakedaimon and sailed off with you in my seafaring ships…” Book 6.  In modern language, this is something like ‘I love it when you’re angry’, and ‘I want to rape you like I’ve never raped you before…’ Nice.

When he goes to find him, “Hektor found Paris in the bedroom, fussing over his exquisite armour.” Instead of being in the male sphere of action, on the battlefield, he is in the bedroom, where his wife is weaving – the female sphere of action and quite the wrong place for him to be.  Hektor berates him, quite fairly, for his behaviour: “Strange man! no-one in all fairness could belittle your success in battle [EDIT: I beg to differ – see 7] as you are a brave fighter [EDIT: HA!]. But you deliberately hang back and refuse to fight, and my heart within me is pained at that, when I hear the shaming things said of you by the Trojans, who have much hardship to endure on your account.”  Then Paris replies to Hektor in the most crawlingly obsequious way; “Hektor, your charge is not unfair, and there is justice in it, so I will tell you the truth, and you mark what I say and listen to me. It is not so much anger or resentment at the Trojans that has kept me sitting in my room, but I wanted to give way to my distress. But just now my wife talked me round with gentle persuasion and urged me back to the war and I think that would be best myself – victory switches from man to man. So come now, wait for me while I put on my armour of war: or you go on, and I shall follow – I think I shall catch you.” Yeah right: the way his wife ‘talked him round’ was to tell him she wished he “had died there, brought down by a man of strength,” at her former husband Menelaus’ hands. As she tells Hektor (a man she actually respects), “I wish I had been the wife of a better man than this, one who had sense for men’s outrage and all the shaming things they say. But this one has no wits in his head no, and never will in the future: and I think that he will meet the reward for that.”

“So he spoke. And Hektor of the glistening helmet made no answer.” Too right he didn’t.

6) “‘Hektor, your taunt is not unfair, and there is justice in it… but do not charge against me Aphrodite’s lovely gifts: there is no discarding the glorious gifts that come from the gods’ own giving, though a man would not take them of his choice.'” Book 6

7) This is hilarious: “Paris … was bending his bow against the son of Tydeus (Diomedes), shepherd of the people, leaning against the gravestone of Ilus, son of Dardanus. …It did not leave his hand in vain but pierced the flat of Diomedes’ food, going right through it and fixing itself in the ground. Paris, with a hearty laugh, sprang forward from his hiding-place and taunted him, saying: ‘You are wounded! My arrow has not been shot in vain; would that it had hit you in the belly and killed you.’ Diomedes… answered: ‘Archer, you who without your bow are nothing, slanderer and seducer, if you were to be tried in single combat fighting in full armour, your bow and arrows would serve you little stead. Vain is your boast that you have scratched the sole of my foot. I care no more than if a girl or some silly boy had hit me. A worthless coward can inflict but a light wound, but when I wound a man, though I but graze his skin it is another matter, for my weapon will lay him out.‘.” Book 11

Compare these reactions to the events of Book 6, after Paris fails to complete his duel with Menelaus, is spirited away to his bedroom in Troy by Aphrodite, and is cursed, to his face, by his wife and brother:

Helen to Hektor: “…it is your mind above all others that the war’s work besets, all for the sake of the bitch that I am and the blind folly of Paris. On us two Zeus has set a doom of misery, so that in time we can be themes of song for men of future generations.” These two understand the seriousness of the war and the culture of shame in which they live.

Paris: ” As soon as he had put on his splendid armour, he hurried off through the town at full speed, like a stallion who breaks his halter at the manger where they keep and fatten him, and gallops off across the fields in triumph (!) to the bathing-place in the delightful river. He tosses up his head; his mane flies back along his shoulders; he knows how beautiful he is; and away he goes. skimming the ground with his feet, to the haunts and pastures of the mares. So Paris, Priam’s son, came down hotfoot from the citadel or Pergamum, resplendent in his armour like the dazzling sun, and laughing as he came.” Shame? What shame? What’s ‘defeat’? Isn’t life grand! I’m a spoilt golden child and I’m going to have sex! Aren’t I pretty!

EDIT: I completely forgot this little Homeric aside from Iliad Book 11, when the sons of Antimachus are captured by the Atreides:

Paris (Alexandros) *bribed* Antimachus, not just to vote against giving Helen back to Menelaus when the Trojans met with the Achaians to decide what to do, but to actually *kill Menelaus* while he is under Xenia as an ambassador in Troy. (Maybe not so ‘wise-hearted’ Antimachus after all?)  And, on top of that, this plot was clearly discovered, and is the cause of Antimachus’ sons deaths in revenge for it.

Does that man ever get his hands dirty?

All quotations from Hammond and Rieu translations. Screenshots of the text from the Perseus online text (http://www.perseus.tufts.edu/hopper/text?doc=Hom.%20Il.%2011&lang=original).

13 thoughts on “Why Paris is such an utter plonker”

This site uses Akismet to reduce spam. Learn how your comment data is processed.